↓
This hike is the 11km option of the Half Dome Assault. It goes past Vernal Falls to the top of Nevada Falls where it departs from the Half Dome ascent to go down John Muir trail.

The hike starts at the Happy Isles trailhead on the trail to Vernal Falls. This part of the trail is still pretty crowded even this early in the morning (we left Curry Village about 6:30 AM). Past the bridge crossing the Falls are bathrooms and water fountains. Shortly after Vernal Falls, the trail splits, we are taking the slightly faster but more strenuous Mist Trail. The trail winds its way up on steps blasted into the granite. It could be slippery at places but it’s late enough in the year so that the trail is almost completely dry. The mist comes from Nevada Falls, which you can admire from close up from the trail. 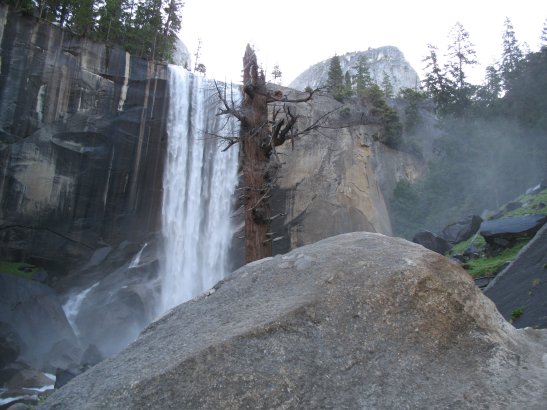 One of the first good views of Nevada Falls from the Mist Trail. 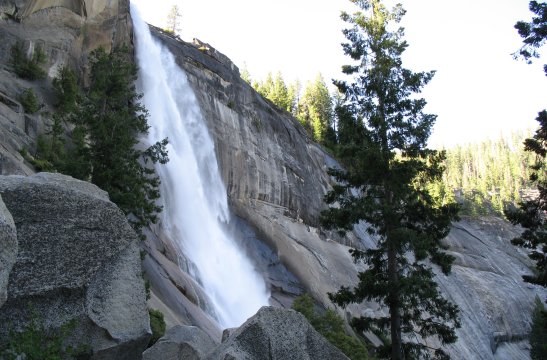 You can see where the mist comes from…

If you’re walking slowly and steadily, the trail is fairly manageable. Stopping to take pictures is often possible, although you will quickly loose your spot in the human snake making its way up to the top of Nevada Falls. This often leads to passing the same people again and again. At the top of the trail, there is another split. The trail to the left leads to Half Dome. The trail to the right leads to the John Muir Trail. I say good-bye to my friends who are in pursuit of the Half Dome summit and head toward John Muir trail. This trail starts out with a top view of Nevada Falls. 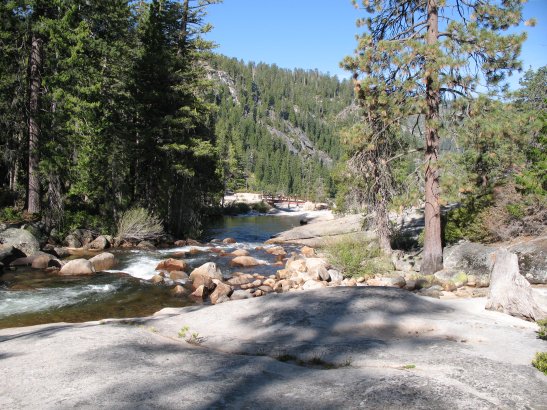 The view toward John Muir trail and the Nevada Falls is just gorgeous. 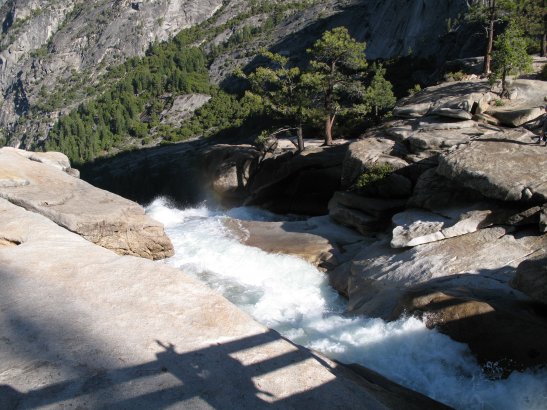 The view of Nevada Falls from the bridge leading to John Muir trail. People who only use Mist Trail miss this view unless they make a slight detour…

Along John Muir trail, the valley views are magnificent and you can see Nevada Falls for about half the descent back down to the valley, which I very much enjoyed. Along the trail, a section was quite wet with a natural shower created by water running off a granite wall. Fortunately, sticking close to the wall allowed hikers to pass the section relatively dry. I noticed that the hikers I encountered, all of them going up John Muir trail, were pretty chatty. Almost all of them greeting me cheerily. I noted the difference to the hikers on Mist Trail, who, if they weren’t resting, silently climbed up the trail without air left for talking. Although I very much enjoyed the loop allowed by going up on Mist Trail and down on John Muir, keep the difficult level in mind when you ascent! 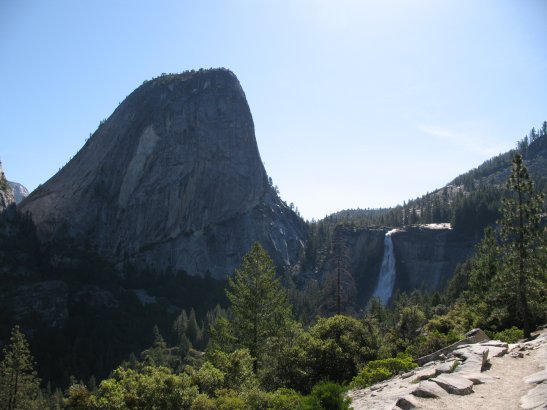 One of the last views of Nevada Falls from the John Muir trail close to the higher intersection with Mist Trail at Clark Point. 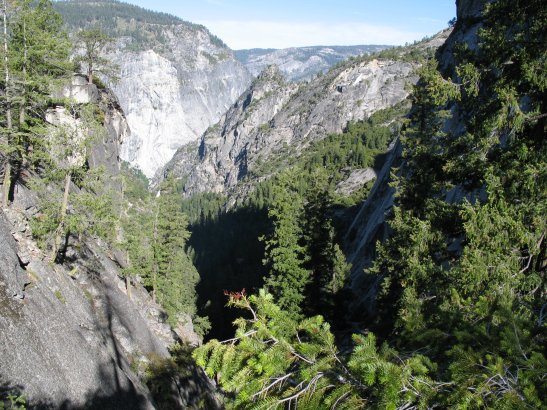 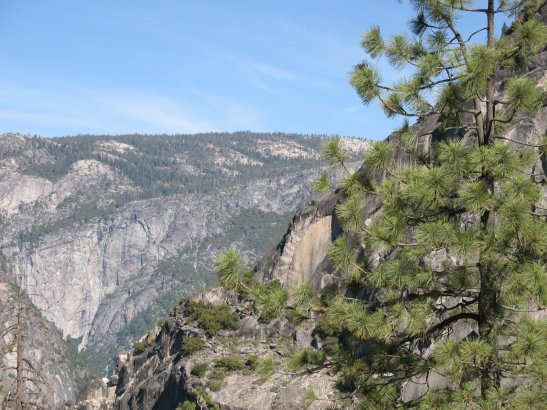 And more Valley views from the John Muir trail.

At Clark Point, John Muir trail intersects with a trail leading to Mist Trail. There I ran into three mounted people: a guide with two tourists on their way up on horses. Although directed at the two tourists, I received confirmation that I was indeed looking at Half Dome. 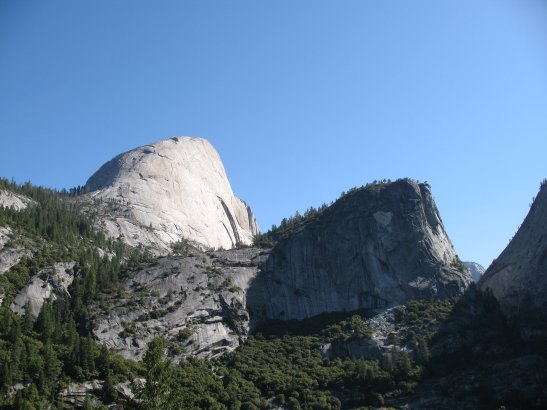 Half Dome as viewed from Clark Point on John Muir trail. It’s the bald one…

Shortly after Clark Point, the views disappear as you descend closer to the Valley. The number of people I encountered increased with the closeness to Vernal Falls. Past Vernal Falls, the trail teams with groups of people, including tons of children. I suspect most of them were heading only to Vernal Falls. But certainly some of them looked like they were going all the way up to Half Dome, more or less prepared. Back at the trailhead, I was fascinated by the station monitoring the Merced River’s water-level. A sign points out how high the water rose on a fateful day in January 1997. After reflecting on the power of water, underscored by the many waterfalls, I head back to Curry Village to change and for lunch. On my way back to the Village, I encounter three people staring at something. I stop to see what they are looking at: a bear and her cub! Taking about an hour-long break, I set out to hike the Yosemite Valley Floor Loop refreshed.